It was the first time in ten years that I had found myself viewing flats and I soon remembered how frustrating and time consuming it was. Flats that had used some license with the photography, flats that opened my eyes to parts of the city I never knew about. Generally it wasn't a satisfying experience - but then, out the blue, old family friends rescued us by telling us they had a flat that had suddenly come up for rent. It was ideal.

When you wake up and it's raining and your destination is called Hells Glen you know you'll have experienced more comfortable days in the saddle. Despite this I was optimistic: the forecast was to get better and I'd spent so many weeks sitting down at a computer that I hungered for the outdoors.

December was an odd one, but not in a bad way. The warm weather wasn't welcome but aside that, 3 weeks off work to include birthday celebrations meant that going back to work was a shock to the system to say the least. The days are getting very slightly longer and the good kind of cold weather has come for a while. I'm frustrated not to be getting out on the bike but like many things, having eased into fatherhood now, I've become a lot more realistic about free time. The house, I realise, will generally be a disaster zone for a few years. unpacked drawers and strewn books means that someone is having fun. Because Una has managed to develop an institutional routine in the sleep department, she has a massive appetite for movement during the day. Because we are also aware how lucky we are to get sleep, we praise her every morning, much like a deity. The playtime related, daily upheaval of the house is another small price to pay for her unwavering snooze-time.

A year of being a parent has come and gone. Certain parts of it you allow for, or you have an inkling about how they'll be. There are two things that currently stand out, 12 months on: for good and bad. One is nursery germs and the other is a baby being a prop to engage with strangers and make them smile.

I know that people are lovely: most people are lovely, but the more you become an adult and are surrounded by adult things in adult only environments, amongst strangers, human nature has it that others are a threat. The unknown, you should not let your guard down to. Babies counteract this in a wonderful way. The innocence that they point, smile and stare at strangers breaks down any barrier. Train, bike, bus, restaurant, shops - it's the ultimate glue for society to be trusting and open. It's completely beautiful to watch.

On the flip side we have germs and viruses: the first birthday party we went to we picked up the vomiting bug. Me in London later in the week being escorted home by a new client, Laura leaving the event she had been working up to for months. A couple of colds developed into sinus infections which floored us for a week. The idea of my immune system having to withstand this for the next 5 -10 years strikes the fear of God into me. I can't believe I have been so naive to this - How we will learn!

Turner, at it again 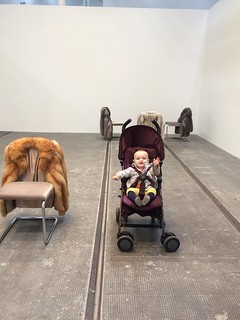 The Turner Prize made a visit to Glasgow which is a great thing, and appropriate, given the influence Glasgow based Artists have had in the prize over the past decade or so. I enjoyed the immersive show at the Baltic in Gateshead a few years ago and left feeling inspired by Assembleâs engaging work with communities at the Tramway this time. Unfortunately I didnât understand Bonnie Camplinâs âmyth-science of energy and consciousness researchâ or Janice Kerbelâs audio piece. Nicole Wermerâs fur coats are growing on me, just as they were the chairs they are permanently attached to (itâs all about temporary ownership in public spaces you see). Both Assemble and Wermerâs pieces are as much about design as art which is maybe why I was more attracted to them. I would argue this is âhardâ art - quite inaccessible to mates down the pub. And thatâs fine if itâs all about being high brow. The language in which some of these pieces are described is very ambiguous. They should have a plain english translation. I think the shared, transparent, practical and positive approach that Assemble have brought to the prize is to be applauded. Art is anything. 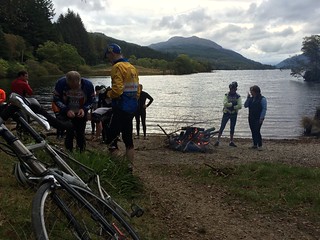 Receiving my first 'racer' in my mid teens, there were few to be seen on the roads of Ayrshire. I started riding with some guys from Largs - it was already all about tech and kit: clip-less pedals and aluminium frames. I would only hear about 'drumming up' after Art School when I bought my first bike on HP. I joined the Glasgow Wheelers and during social evenings there was chat of this 'tea and soup heated on a camp fire' cycling tradition. It didn't seem to go with STI levers or carbon but it was more about why I was into cycling than time trials and scales. In any case - Geoff Smith, from the new crew I cycle with, arranges an annual drum up last week and it was a lovely way to say hello to sunny autumn. A ride to Gourock followed by ferry to Dunoon and a gallop up the cliff at Ardentinny found us half way up the magnificent Loch Eck and surrounded by some heavy weights of championships gone by - all around a fire keeping warm, meeting new friends and supping on charcoal infused soup. And there was no place I'd rather have been. 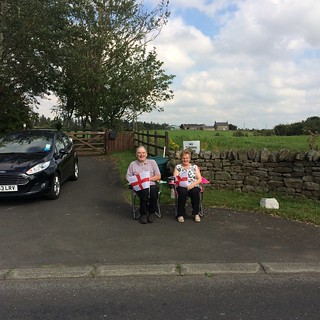 After the logistics of a trip to Rejkyavik with a 7 month old, the prospect of a simple car journey down to the grandparents in Newcastle seemed like a good plan. It was streamlined travel: I even left the bike at home. It so happened *cough* that the Tour of Britain was in the area so we planned a couple of half-day trips to Blyth (to welcome the riders over the border from Edinburgh) and Hexham (to see them off on the hilliest day, in the town Laura was born in). Sad but not surprised the local bike shop didn't rent bikes (this wasn't Spain) I was delighted that the Cycle Hub had a decent road bike down by the Tyne at Byker. 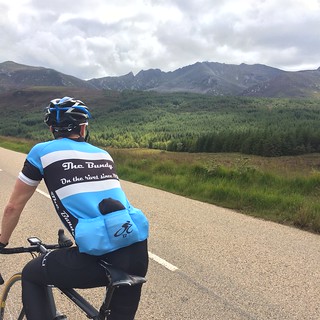 Tripped up by winter

I blog less these days than I did in the past, when I had a bit more time and energy on my hands, and that's fine. I realise also that part of the annual routine is less updates during winter, and that's fine as well. It's good to embrace these things.

One of the reasons for not updating is more injury - the trauma my poor left arm has been subjected to over the past 12 months would make Evil Kneivel wince. Even on sabbatical from the bike, I still managed a fall whilst walking down the street which was bad enough to break my arm in 13 places. Another February healing: Not a routine I want to get used to!

It's incredible, but culturally important, that there still exist shops like Tam Shepherds in the centre of town. It's mis-placed sense of being from another era is only briefly brought into the Amercianised 21st century with the inclusion of a card payment system. An eighties carbon shuttle would have been perfect. And if I'd given them an 'Access' credit card.

The woman who runs the shop is balanced. She has a kind smile but quieter and more business like than you'd expect from someone who owns a trick shop. She plays her own music - an un-placeable 70's band. Despite it being less than a week to Christmas, there is little hint of festive cheer. It's refreshing. A dip into independent retail which has almost vanished from the city centre.

The layout of the shop is how it has always been - long cabinets with an oak frame and glass top and front to see the dirty soap, fake poo, whoopee cushions, blood capsules. There is low-level grey-patterened gingham formica which goes largely unseen amidst the colourful masks and tricks sitting below fluorescent tube lighting. Just as the owner is in a middle aged cardigan, unremarkable hair and a indistinctive dark blouse. She's well aware that you cannot compete with the madness they have on sale.